The Merry Wives of Windsor

The Merry Wives of Windsor

Shakespeare in the Summer returns to Clear Creek Community Theatre in July with the comedy The Merry Wives of Windsor.

It’s a story of marriage, wealth, jealousy and lies.

Sir John Falstaff, staying in Windsor and down on his luck, decides to restore his fortunes by seducing the wives of two wealthy citizens.   He sends Mistress Page and Mistress Ford identical love letters, but they discover his double dealing and set about turning the tables, arranging an assignation at Mistress Ford’s house.

Frank Ford has heard of Falstaff’s plan and decides to test his wife’s fidelity. Pretending to be Master Broom, he pays Falstaff to seduce his wife on his behalf, twice almost catching them together.

The Pages’ daughter Anne is pursued by three suitors. The French physician Doctor Caius is her mother’s choice, whilst her father prefers Slender, Justice Shallow’s kinsman. Anne herself is in love with Fenton.

Mistress Quickly is being paid by all three suitors to promote their cause.

A duel between Doctor Caius and Parson Evans is averted when the Host of the Garter Inn plays a trick on them, and they in turn pay him back.

In Windsor Great Park at night, Falstaff is set up for his final punishment – and one of Anne Page’s suitors is succe

Shakespeare in the Summer, in air conditioning.

Opening night is Friday, July 15th., with performances each weekend through Sunday, July 24th. Show times are Friday and Saturday at 8:00pm, with Sunday Matiness at 2:30pm. 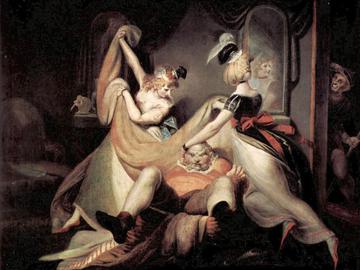