Considered by many to be Shakespeare’s greatest tragedy, Macbeth is the story of a brave Scottish general who receives a prophecy from a trio of witches that one day he will become King of Scotland.   Consumed by ambition and spurred to action by his wife, Macbeth murders King Duncan and takes the Scottish throne for himself. He is then wracked with guilt and paranoia. Forced to commit more and more murders to protect himself from suspicion, he soon becomes a tyrannical ruler. The bloodbath swiftly takes Macbeth and Lady Macbeth into the realms of madness and death.

Throughout the play Shakespeare points to the inconsistency between appearance and reality. Though it is a knotty and difficult idea, it nevertheless suggests that in Macbeth’s world,  you can never be sure whether it is a mirage, an apparition, or a dagger.

Clear Creek Community Theatre's 2018 production of Macbeth is directed by Robert Leslie Meek who has previously directed acclaimed productions of Titus Andronicus, Romeo & Juliet, Hamlet, and the Tempest at CCCT.

“By the pricking of my thumbs, something wicked this way comes. . . “  Macbeth is on stage at CCCT for two weeks only with performances on July 13, 14, 15, 19, 20, 21 and 22nd.  July 19th is a special Thursday night performance.  Afternoon matinees are offered both Sundays.

“Out, out, brief candle! Life's but a walking shadow, a poor player that struts and frets his hour upon the stage and then is heard no more . . .”

Don’t miss it.  Shakespeare in the Summer, in air conditioning! 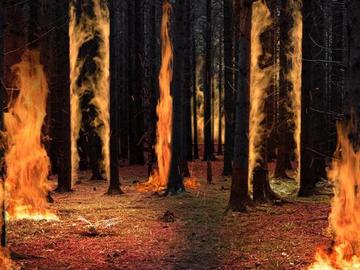